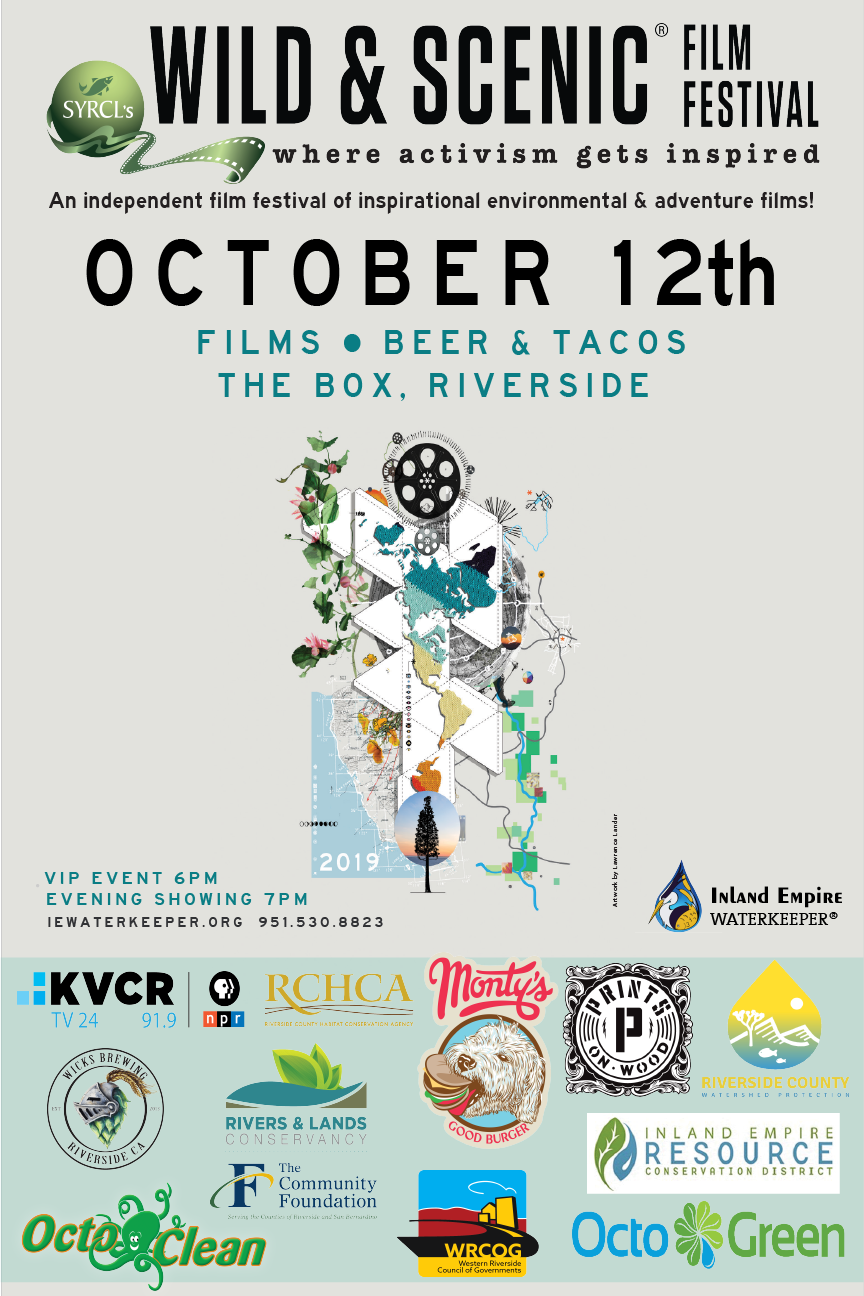 The Wild & Scenic Film Festival is On Tour and returns to the Box Theater in Downtown Riverside on Saturday, October 12th!  Join us for this independent film festival of inspirational environmental and adventure films in Riverside. The Wild & Scenic Film Festival On Tour is one of the largest environmental film festivals in North America. The goal is to use inspiring and thought-provoking films to ignite environmental activism locally. Inland Empire Waterkeeper hopes the festival will increase community understanding of the connection we share with the planet and our role as stewards to preserve the environment for future generations.

Sponsorship levels include radio ads, film selection, name and logo on theater and lobby screens, and booth at the event.

Thank you to our 2019 Wild & Scenic Wetland & River Sponsors!

Thank you to our 2019 Wild & Scenic Creek & Stream Sponsors!

Stay up to date on all Wild & Scenic by visiting its Facebook page!

Inland Empire Waterkeeper hosted its inaugural Wild and Scenic Film Festival on February 24th, 2018. This is the first event of its kind within the Inland Empire that will be here for years to come. The Wild & Scenic Film Festival is a call to action! Film-goers are transformed into committed activists, dedicated to saving our increasingly threatened planet. See environmental and adventure films that illustrate the Earth's beauty, the challenges facing our planet, and the work communities are doing to protect the environment.

The Wild & Scenic Film Festival was started in 2003 by the South Yuba River Citizens League (SYRCL, pronounced 'circle'), a watershed advocacy group based in the Sierra foothills of Northern California. The organization was formed in 1983 when a small group of concerned citizens banded together to fight against several proposed dams. The festival's namesake is in celebration of achieving Wild & SCenic status on 39 miles of the South Yuba River in 1999. The festival celebrates its annual event in Nevada City, CA each winter featuring over 150 award winning films and welcoming filmmakers, celebrities, and activists who bring a human face to the environmental movement. The stories give us a sense of place and what it means to be responsible stewards of the earth. Once the curtain closes in Nevada City, SYRCL shares their success with other organizatiosn nationwide by packaging the 4-day event into a one-night festival which visits over 150 communities worldwide. The tour is building a grassroots network of organizations connected by a common goal of using film to inspire activism. The festival's seven National Partners: CLIF Bar, Patagonia, Sierra Nevada Brewing Company, Orion Magazine, Klean Kanteen, Earthjustice and Barefoot Wine & Bubbly have joined together to support this campaign. They help to bring these inspiring and provocative films to communities across the country.

Waterkeeper presented its first Wild and Scenic Film Festival at the Box at the Fox Theater in Riverside on Saturday, February 24, 2018.  We began the day with our pre-show event, where we had some amazing organizations that came out to do activities, including Rivers & Lands Conservancy, Inland Empire Resource Conservation District, Riverside-Corona Resource Conservation District, and S.C.R.A.P. Van Gogh! We then went inside the Box Theatre and enjoyed some exciting, kidspirational films!

In the evening, Wicks Brewing hosted the pre-show event on the VIP Terrace, where attendees enjoyed free craft beer, tacos, a full bar, and more. Festival-goers also had the opportunity to bid on incredible auction items from Mario's Place, Jeff Soto Art, and other organizations in order to support our environmental education programming. We then showcased four stunning adventure and wildlife films, that made us laugh, cry, and applaud. Be on the lookout for next year's event!

Thank you to our 2018 Wild & Scenic Film Festival sponsors who made this year's event possible.