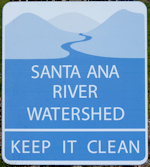 Freeway Sign Program
The Santa Ana River Watershed Freeway Sign Program was initiated by Inland Empire Waterkeeper with support from Western Municipal Water District and the Santa Ana Watershed Project Authority. The Santa Ana Regional Water Quality Control Board unanimously voted its support for the Inland Empire Waterkeeper Watershed Freeway Sign Program at its April 18, 2008 board meeting. The vision of the project is to install 15 signs along several interstate freeways and state highways entering the watershed (see map below). The purpose of the signs is to create awareness that people are entering the Santa Ana River Watershed and to encourage them to keep it clean. Specifically, 12 of the watershed signs will state, “Santa Ana River Watershed: Keep It Clean” and 3 signs will state, “San Jacinto River Watershed: Keep It Clean.” The signs will adhere to the design guidelines already approved for an existing program in San Diego County. Inland Empire Waterkeeper will use Caltrans-approved vendors to create the signs, which will be installed by Caltrans personnel or approved Caltrans vendors.

Inland Empire Waterkeeper would like to express our gratitude to green building consultant Eric R. Shamp, owner of Ecotype Consulting in Redlands, who stepped up and provided us with a generous contribution of $1,500 for this project. The money will be used to pay for our Caltrans encroachment permits for the signs and will officially get the program off the ground. 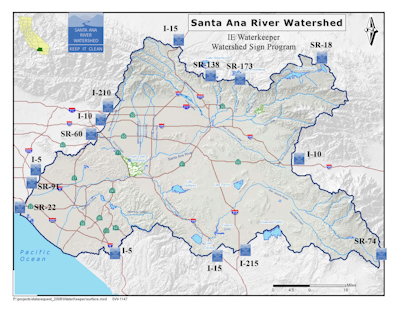 Public Education Campaign
The public education component of the Watershed Awareness Program will include billboards, media events, an interactive Web site, and public service announcements. During this approximately one-year process, we will be educating the public about the watershed while explaining the meaning of the signs. The media effort will continue after the signs appear on the freeways and millions of people are passing them each day, so that they will understand the deeper message. We will choose billboard locations near the signs to drive home the messages that, (1) they are entering our watershed, (2) it has inherent value and meaning, and (3) there are reasons to keep it clean through simple acts of stewardship.

The Freeway Sign Program began in the summer of 2008 with coordination between Inland Empire Waterkeeper and Caltrans Districts 8 and 12. Several setbacks have occurred but we fully intend to complete this project with 2 signs in 2009 and 5 more in 2010.