Advocating for the Forest and the Community

Inland Empire Waterkeeper is actively advocating for the Cleveland National Forest and the adjacent communities in the face of the Lake Elsinore Advanced Pumped Storage Project, which proposes a hydroelectric plant at Lake Elsinore, and the Talega-Escondido/Valley-Serrano Interconnect Project (TE/VS) which plans to construct high-voltage transmission lines through the Cleveland National Forest.  IEWK has monitored streams along the eastern foothills of the Santa Ana Mountains to develop a baseline database of current forest health, coordinating educational materials and outreach to educate the community on projects slated for the Forest, and advocating on behalf of the Forest.

See several photos of what can happen to a watershed because of power lines in the forest by clicking on the image above of the recent Grass Valley Fire.

LEAPS stands for Lake Elsinore Advanced Pumped Storage.It is a joint project of the Nevada Hydro Company Inc. and the Elsinore Valley Municipal Water District. The developers would dam a canyon above Lake Elsinore and develop hydroelectric power for use during periods of peak demand.  The plan also includes building 30 miles of transmission line on 170-foot towers through the Cleveland National Forest.  The reservoir would cover roughly 100 acres and the dam would be 180 feet high.  The Federal Energy Regulatory Commission (FERC) is responsible for granting the hydroelectric permit, and the U.S. Forest Service is responsible for granting the transmission lines. 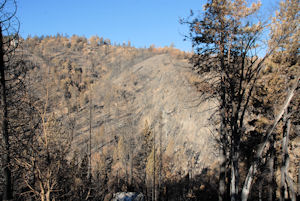 At night when the cost of electricity is low, 10% of Lake Elsinore’s water would be pumped up into the reservoir During peak demand hours when the price of electricity is high, the water would be released back into the lake, generating power.  Elsinore Valley Municipal Water District conceived the project in 1988 to produce a modest amount of peak demand power, and to collect funds from the power plant’s operator to purchase water to stabilize lake levels.  Over the years, the scope has grown significantly.

Regulatory agencies, including FERC and the California Energy Commission, have expressed concerns about the financial aspects of the advanced pumped storage (hydroelectric) portion of the project, and seem to be leaning toward going forward with the transmission lines through the Cleveland National as a separate entity in case the hydroelectric portion is found to be unfeasible. Nevada Hydro has filed papers with the California Public Utilities Commission to go ahead with just the transmission lines. If this becomes purely a project to build transmission lines through the Forest, then we believe that Elsinore Valley Municipal Water District has no business being involved in the project, because an electrical utility transmission line is inconsistent with EVMWD's mission to provide high-quality drinking water to its customers. So far, EVMWD has reportedly spent more than $3 million on the project.

The major focus of this project now seems to be turning away from the financially questionable advanced pumped storage aspect and toward the Talega-Escondido/Valley-Serrano 500 kV Interconnect. The transmission lines as described in the draft EIS cross more than 22 blue-line streams and have great potential for damaging these waterways.  “Construction of transmission line towers at stream crossings could affect water quality and fish habitat in the streams that are crossed,” according to the draft EIS (page 3-81). Further, there will be impacts from the maintenance roads used to access these towers. The project proponent claims measures will be taken to reduce impacts. Avoiding riparian areas and instituting setback restrictions for every watercourse are unrealistic mitigation measures for a project that will be out of the sight of the public. If the transmission line is approved, we are highly skeptical that (1) the project contractor would implement proper erosion and sediment controls, and (2) the controls would be adequate to protect beneficial uses.  We also object to the project’s premise of constructing massive electrical transmission lines in a U.S. National Forest, one of the few last pristine environments left in Southern California.

Inland Empire Waterkeeper believes that running a 30-mile-long utility transmission line through one of our most highly impacted National Forests sets a terrible precedent for development in such areas. There are not only aesthetic issues, but potential negative impacts on water quality, recreational uses and fire potential. The recent Grass Valley Fire in the neighboring San Bernardino National Forest was caused by power lines. That fire burned hundreds of acres, destroyed nearly 200 homes and caused the evacuation of more than 30,000 people. No assessment has yet been made on the damage to the Mojave River Watershed and Santa Ana River Watershed, but the adverse effects of this fire on water quality and flood potential could be enormous, depending on the intensity of the next few rainy seasons.

We believe that Southern California’s largest natural lake, the San Jacinto River and Santa Ana River watersheds, the Cleveland National Forest, local wildlife, and the quality of life for people in the Inland Empire will be negatively impacted by the LEAPS project as it is currently envisioned. Even though we are the fastest growing area of California, we have not written off the natural and aesthetic environment of the Inland Empire, and we hope that our officials in Sacramento will not do so.

The Nevada Hydro Company (TNHC) proposed the Talega-Escondido/Valley-Serrano (TE/VS) 500 kV Interconnect Project as a transmission project connected to the Lake Elsinore Advanced Pumped Storage (LEAPS) Project; TE/VS would help facilitate development of the LEAPS Project. The TE/VS 500 kV transmission line would create an interconnection from the LEAPS hydroelectric energy storage facility to Southern California Edison (SCE) and San Diego Gas and Electric (SDG&E). Three facilities are going to physically internconnect the TE/VS and LEAPs Project with the SCE and SDG&E systems. New circuits will be used, as well as upgraded exisiting ones to increase the transmission lines capacity. SCE and SDG&E will need to upgrade to accommodate the project's transmission and generation components.

The Nevada Hydro Company believes benefits of this project include increasing the accessibility of electric power generated from renewable resources, and helping to manage this energy production more effectively. It will also improve energy distribution in southern Riverside County. A few objectives of the TE/VS are to reduce congestion, provide an interconnection between SDG&E and SCE transmission systems, long-term infrastructure planning efforts, and enhance localized electrical facilities and systems. However, the Inland Empire Waterkeeper strongly opposes the development of the Talega-Escondido/Valley-Serrano Interconnect Project in combination with the LEAPS Project.

The LEAPS Economic Evaluation has stated that, "When revenue and cost factors are considered, we conclude that the LEAPS project, as a merchant plant, is not viable at this time." LEAPS is expected to have only $0.3 million in annual new energy sales, not the $54.6 million TNHC predicted. This project is not financially sound and would be an environmental disaster for the Cleveland National Forest. Habitats for federally protected species and sensitive plant communities would be destroyed along with hundreds of acres of chaparral and grasslands.The water and air quality in Riverside, Orange, and San Diego counties would be negatively affected due to transportation of polluted water from Lake Elsinore and acitivities from heavy construction. Due to these significant environmental impacts, the LEAPS and TE/VS have been in the review process for years costing large sums of ratepayers' dollars which will not be reimbursed if the project is not built.

Make a donation to Inland Empire Waterkeeper to continue our mission